In this lesson, you will extend your knowledge of statistical data by learning to read and interpret box and whisker plots and other data representations. Box plots are one form of graphing that can be used to analyze how data is distributed. Dot Plots are not as specific, but they can also be used to compare two sets of data.

In this lesson, you will learn how to compare two data sets and continue to expand your understanding of graphs, mean and median, and interquartile range.

Use the data to create a box-and-whisker plot.

Step 2: Draw a number line and plot a point for each value from step one.

Step 3: Draw a box from the lower to the upper quartile. Inside the box, draw vertical lines through the median, and draw horizontal lines, “whiskers” to each of the extremes.

Now, let’s add another layer to our box and whisker by plotting two sets of data on one number line. The same steps are followed each time a box-and-whisker plot is created. We will begin with a word problem that requires comparison of data.

Dee is researching bird-watching tours for her upcoming trip to the coast. She has found two companies that offer the same type of tour for about the same price and is having a difficult time trying to decide which tour is best. She created a box and whisker plot for each company to help her with the comparison.

Examine the two box plots on the number line. The median number of birds seen on Burt’s Bird-Watching tour is 54 and the median birds seen on Friendly Feathers are 51. Remember that the length of the box indicates a greater interquartile range so we can see that Burt’s has the greater range.

Dee knows that the interquartile range on the Friendly Feathers tour is smaller, which means that the data is more predictable, and she wants to make sure that she sees lots of different birds so she decides to go on the tour with Friendly Feathers.

For more in depth information on creating and reading a box-and-whisker, take a look at these videos.

Finally, here is a lesson on when you might want to use a Box and Whisker Plot to accurately represent your data.

You can also compare data using a dot plot. You have learned in prior years to read and analyze a single dot plot. In this example, you will see how data can be easily compared between the two plots.

A middle school girls’ track coach records the time, in minutes, for each player on the seventh grade team and the eighth grade team to run one mile. The dot plots below show the results. Which of the following statements best compares the median times for the two teams? 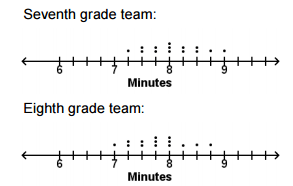 Now, let us examine overlapping plots. The dot plots below show the high temperatures, in degrees Celsius, of two cities for the past 15 days. Do more than half of the data points from the two cities overlap? 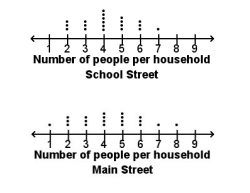 The average monthly rainfall (in inches) in Springville and in Centerville was recorded each month for one year. The box-and-whisker plots display the data.